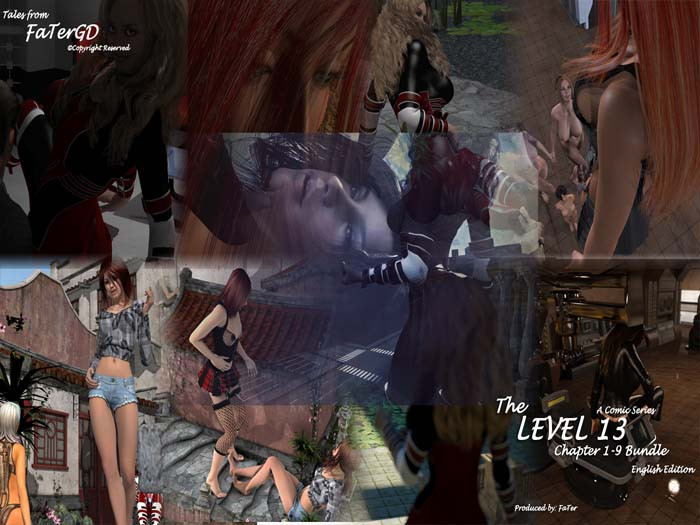 Here's the description for each:
Level 13 Chapter 1 :A Brand New Life
James, after breaking up with his girlfriend, life becomes so meaningless.
Seeking more challenges, he joined the World Top 1 company.He uses his intellegence to prove that he is special, but he is just more than just a successful businessman.
The story started at when he received an email from the company's CEO, Diana,telling him to meet her at level 13 midnight, rumors goes all around the company that anyone who entered this level, had never came back.
Of course James does not believe it , he treats it as a formal promotional chat with his boss, but he is no idea he's about to enter a BRAND NEW LIFE.
It contains 148 images with content.
It contains giantess, growth

Level 13 Chapter 2 : The Biggest Enermy
The text message Diana sent to her sister is intercepted by this huge enermy group,
or we can say, the enermy empire. Diana and James have no idea who they are dealing with,
and how powerful the highest command of this empire---- the goddess is.They are now facing the 'biggest' enemy ever in their group's history.
While tracing Diana and James' location, Alice, which is the second highest command, picks out four womem coming from different size group, and form a 'elite' group for this special 'capture mission'
When Alice is giving a speech before this battle,the goddess, found something special among this elite group, and she makes actions to prove her mind.

Miles of traveling, James and Diana has reached the destination.
James is exhausted.
After meeting her leader, all he wants is to know
How can they grow so fast in just few seconds?
Why is he so special than becomes 'wanted'?
How did he involved in?
The leader is going to tell a story,
about a black op's program funded by the government thirty years ago.
And it Reveals EVERYTHING
It contains 206 images, mainly growth, feet, tease, breast, legs, mini-giantess and story.

Here is the link for promotional preview:
http://www.e-junkie.com/FaTer/product/493589.php&#35;Level+13+Chapter+3+Promotional+Preview

After the injection, Lissa noticed that
everything becomes weird.
From the beam of laser light in the process
that seems to do nothing with the body,
to the smile on Leona's face.
Something is not right during this
Life changing experiment.
But what is it?

Lessa, Diana, Alex, Katia, James and Soldiers
are surrounded.
Facing Alice's gigantic feet,
almost twice their height.
There is not much chance...
to escape.
This is not a fight...
but a slaughter.


Being the only two survivers
from the massacre at their rendezvous point,
Diana and James, arrives the Technology Center of the organization,
told by Lessa, who finally, after decades,
meet the gigantic goddess --- Leona, again.
Assuming their leader is dead,
Diana and James know,
what they are holding,
might just be the final chance of the world...
Stepping into the unknown place,
and facing the greatest enemy ever... in the world...
What can they do... Before their final chance is gone...?
And who, are willing to help them?


After all have been through,
Diana, finally succeeded passing James
The key of their final chance,
To the program creator --- Professor Simon
Having a "little" helper, Simon,
Is now back to business...

Now with Jame's help,
It is the time for Diana, and her team,
to make their final stand...

Dust flying, debris falling as James runs onto the roof
of one of the surviving buildings.
With sick smoke blocking all of his vision,
He moves to the very edge,
Anxiously look for his Diana,
All he found is a gigantic hand, from the dying giantess.
"Oh no, Oh no" he said, screaming her name.
But it is overpowered by a sudden bright explosion, on top of the whole city...
...
...
An hour earlier,
Stepping on her "small" opponent,
Mikky is more than confident,
that she could be the hero of the city.
Showing off her strength, enjoying her opponents struggle,
she completely didn't notice,
that not far in the sea,
A foot, bigger than any building, bigger than any city blocks,
is moving towards her...